The Road Not Taken

An Alternate Route to the Top of the Giant 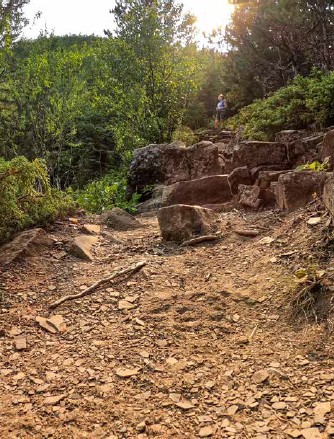 Whaaat? It keeps going? I thought to myself after turning a corner on my bike only to find that the hill I was sure I was cresting didn’t appear to end. I was just past the midway point to Sawyer Bay in Sleeping Giant Provincial Park and, despite being a frequent visitor to the park in all four seasons, I hadn’t biked on this trail in years. The Sawyer Bay Trail starts about 600 metres from the Kabeyun trailhead and runs six kilometres to Sawyer Bay, which has backcountry camping sites and boat moorings. The terrain is best-suited to a mountain bike with suspension or a fat bike—there are a lot of rocks, similar to the Kabeyun Trail. Plus, the uphills are a little easier with larger tires that easily roll over obstacles. Although it’s tempting to fly down hills like a kamikaze, cyclists need to be mindful of other trail users (wildlife included!) and fallen trees (we had to go around or over several). When you reach the bay, head left on the Kabeyun Trail for about 600 metres before taking a left up the Head Trail. This trail lives in the shadow of the Top of the Giant Trail—Sleeping Giant Provincial Park’s marquee attraction and a common bucket list adventure for anyone from or visiting the Thunder Bay area. Don’t get me wrong, the Top of the Giant Trail is spectacular in every way, and the panoramic view from the top is synonymous with the park and the North Shore of Lake Superior. The downside is that the trail is popular and busy, which can detract from the experience if you are the type of person who appreciates solitude in the wilderness. The Head Trail is not exactly the “road not taken,” but it is definitely the path less travelled. The climb is about 2.8 kilometres long (there and back) and it’s strenuous, so give yourself about 1.5 hours for the round trip. The trail climbs 289 metres and takes you past towering cedars and a refreshing little creek to some awesome views of the head and Adam’s apple of the Giant, and Superior’s shoreline. Combining the Sawyer Bay and Head Trails in a bike-and-hike makes for an epic adventure—well worth the price of admission. And, the best part is that by mid-September you might get lucky and have it all to yourself. Did you know? Sleeping Giant Provincial Park has over 100 kilometres of trails—the longest system of any Ontario park—and over half of it is bikeable.