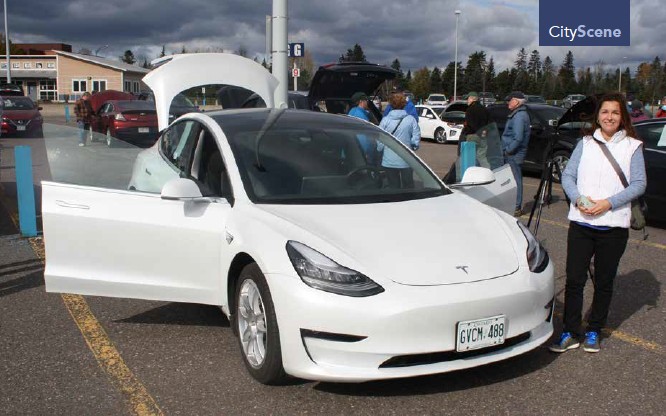 Dozens of electric and hybrid vehicles will be on display again in Thunder Bay early this fall, as organizers with the Electric Vehicle Association of Northern Ontario are holding their second annual electric vehicle show. The event, scheduled for September 24 at the CLE Coliseum building and in the nearby parking lot, will feature a variety of fully electric and hybrid vehicles owned by residents of Thunder Bay and the region. The goal, says Ken Shields, one of the car show organizers, is to allow people to ask questions of those with experience driving them. “What people want to hear is ‘how is it in the winter time,’ and to hear actual stories from people who have survived a winter, that sort of thing, and road stories with respect to range, [and] where you charge,” he says. This year, Shields says that the association—a group of EV owners and enthusiasts who aim to provide information about owning an electric vehicle in a northern climate—has partnered with the City of Thunder Bay’s EarthCare Advisory Committee on the show, which has been very helpful. At this year’s event, they want to present up to 50 vehicles, with space inside for 22 fully electric ones, and plans for another 28 hybrids outside (the carbon monoxide from the internal combustion component of the hybrids’ engines makes starting them up inside impossible). There will also be various displays and information for the public, Shields adds. He says they want to build upon the roughly 30 vehicles shown last year and the 250 people that came by. “It’s going to be big time, in my estimation,” he says. Shields, who owns a Tesla Model Y, says concerns about climate change are driving the need to get more information out about electric alternatives. “It’s our concern about the climate and concern that people aren’t adopting or making changes in their lives,” he says. “We made this change because we feel it’s important to get off carbon-based vehicles.” The federal government has also stated that only zeroemission new cars and lightduty trucks will be able to be sold in the country starting in 2035. Shields adds that the vehicles are also packed with modern technology, smart, and great to drive. “People are hesitant. They’re not sure how to get through the winter, they’re not sure where to charge. These are the questions we get all the time,” Shields continues. “So having a public event where people could come out and kick tires, literally… that’s what our mandate is actually.”