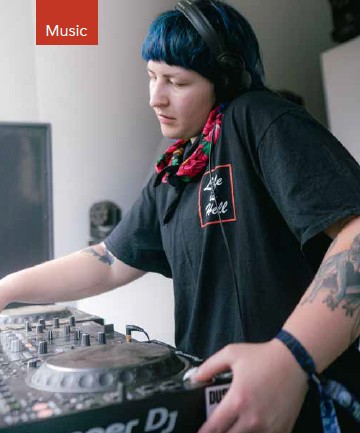 Despite a slow return to normalcy for the local electronic scene, it’s been a big summer for Rhombi, a DJ from Animikii-wiikwedong and co-founder of the Thunder Bay Bass Collective. Music festivals are back, and Rhombi has been playing them coast to coast. “I feel incredibly grateful for the opportunity to attend and participate in the festivals I did this summer. The pandemic seriously impacted gatherings of all sizes so it’s pretty incredible that so many have been able to organize themselves and put on a great show,” they say, fresh off performances at Future Forest in New Brunswick and Shambhala in BC. “Shambhala is in a whole other world, so returning to the farm […] post-pandemic was slightly overwhelming, yet positive,” they say. “Anyone who has attended can attest to the fact that Shambhala is sensory overload when you first arrive, but returning this time as a performer was different. It was a privilege to be able to perform, and I’m so grateful for all of the support and recognition.” Rhombi also had an opportunity to curate a playlist for the Thunder Bay Art Gallery’s Woodland POP!, a group exhibition running until September 25 that presents new expressions of Woodland Style, including visual art, digital painting, NFTs, 2spirit and queer aesthetics, tattooing, contemporary beading, and more. “The opportunity [was] entirely thanks to my dear friend Cyn, who is the community engagement coordinator at the Thunder Bay Art Gallery,” Rhombi says. “I’m connected with a collective of Indigenous DJs and producers as well as some allies called Virtual Pow Wow Fest, put on by Drum Beat Entertainment, which promotes Indigenous artists across Turtle Island through live shows and live streams. Cyn highlighted that my connection to the community made me the right choice,” they say. For the playlist, Rhombi selected music from Indigenous artists from all musical backgrounds, but included as many artists from Virtual Pow Wow Fest as possible, like Handsome Tiger, Tomahawk Bang, Sean Beaver, DJ Shub, Boogey the Beat, and Neon Nativez. “I also tried to select music that reflects the forward-thinking youth who are creating [things that are] beautiful and deeply resonant of the contemporary issues our community is facing, with artists like Arachnid, Ziibiwan, Immortal, OMBIIGIZI and others,” they add, noting that this gave them a chance to share some of the music they listen to on their own time. “Being a DJ is really about being a ‘selector,’ someone who is able to dig through the virtual crates in order to find music that reflects the feelings and perspectives of the community.” With festival season over, Rhombi is turning their focus to internet radio and music production with a goal of widely sharing what the Thunder Bay Bass Collective is doing.