TBShows.com presents On The Scene 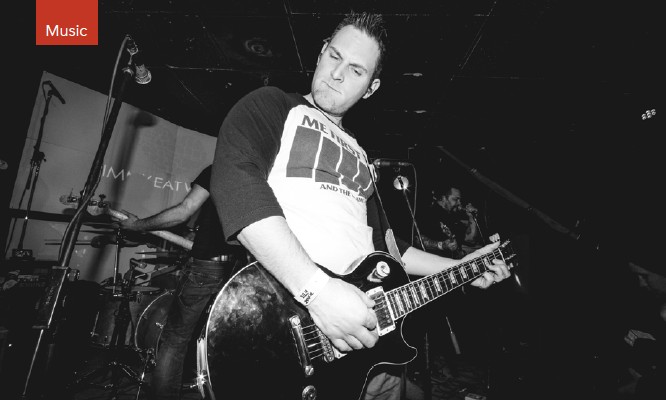 The origin of The Cover Show comes from the days of the Regional Multicultural Youth Council (RMYC) in Victoriaville. At that time I had only gone to a handful of local shows and was very much still learning about the music scene, how it all worked, and who was involved. I was still in high school and went with some friends to see the Rock Idols Cover Show, an all-local, allages show at the RMYC. The format of the show was simple—each band would play a set of all covers of one band. I’ll never forget seeing Christ Punchers cover Swedish hardcore band Refused, a band whose album, The Shape of Punk to Come, I had been playing on repeat for months. I’ll also never forget seeing The Jordana Spiro Experience covering Marilyn Manson. They put on a wild, wild show. I remember seeing their frontman smashing an acoustic guitar into another acoustic guitar until there was nothing left but broken wood and strings all over the stage. Shortly after, he and I would start a band that would go on to terrorize the stages of Thunder Bay for the next five years, but that's another story. The RMYC would eventually stop doing shows and the scene would migrate more and more into The Apollo, one of the very few spaces that was bringing in touring bands and having regular all-ages nights. At this time I was just starting to run my own shows and following the success of my very first night, I thought it would be a lot of fun to put on a night of cover bands that you wouldn’t expect to see at a show. On January 10, 2004, with the help of some friends, I put on the first Apollopalooza Cover Show. The lineup was a mix of local bands who had been around for a while as well as bands who got together solely for this show. The night featured my own band, Jordana and the Bastard Hammers as Manowar, as well as With Regard as The Used, Vaya as At the Drive-In, Harmonial Value as Moneen, Decline as Prodigy, and The New Abortions as Slipknot. This was the beginning of what would become a major event for the Thunder Bay music scene and one of my biggest recurring shows of all time. Since that first night, The Cover Show has evolved and grown substantially, with over 300 bands being covered by over 1,200 homegrown musicians. The show itself has gone from a single night once a year to multiple nights, multiple times a year, with the addition of the Cover Show Encore which features repeat performances from some of the top acts of the show. “It's quite the testament to the talent and music culture in Thunder Bay to pull off this depth and breadth of artists on the regular,” says Ryan Marchand, singer/songwriter. Many local bands, especially among the all-ages scene, played their first show at The Cover Show as a way to test the waters and get a feel for what it’s like to play in a band with other musicians. “Cover Show was always an excellent opportunity to network and collaborate, and a good way to practise taking on different roles,” says Cameron Hopkins, musician and Cover Show veteran. Special shout out to Andrew Edwards of The Selfies, who has played a record-breaking 42 sets at The Cover Show over the years, more than any other musician, making him the reigning Cover Show King. Now in its 26th edition, The Cover Show returns to the downtown waterfront on the Black Pirates Pub stage September 23 and 24 and marks my first live music event since only a few days before the first pandemic lockdowns in 2020. Scheduling, lineup, and ticket info can all be found at TBShows.com.