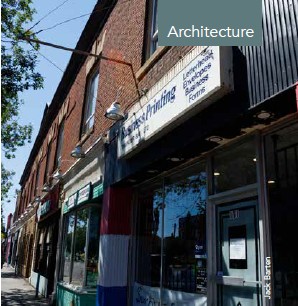 If you have ever taken part in the City of Thunder Bay’s self-guided historical walking tour of the south core, one of the featured stops is the Dyke Block on May Street South. Established in 1904, this structure was just one of many built in Fort William that year and designed by the prolific local architect John C. Stinson. The building was commissioned by its namesake Joshua Dyke, a minister and former mayor of Fort William from 1902 to 1903. When his term ended, Dyke turned his attention towards his own business ventures. He needed a place for the real estate and insurance company he ran with his son, and as he owned property on May Street, he decided to build there. He wouldn’t be the only tenant; the Daily Times Journal reported on October 18, 1904 that the Climax grocery store would be opening there, along with the Singer Manufacturing Company as it was then known, thus starting a rich history of businesses that would come and go from the block for the next 118 years. Dyke chose Stinson who was, by then, well known in the Lakehead for his designs. According to the Biographical Dictionary of Architects in Canada, in 1904 alone he worked on 10 other properties, including the Murphy Block and the Evans-Rutledge Block. Stinson’s design offered practical elements we assume were commissioned, such as storefronts on the lower level as well as apartments above to lease out, while still including intriguing architectural features. The second storey has a crenellated string course running along it, and the parapet roofline is topped by its most identifying feature of a pediment with the year and name of the block. The flat-topped windows of the second floor have prominent stone cut voussoirs and lug sills. It is said that Dyke himself built the foundation stonework. In 1910, a $20,000 annex added 4,000 square feet to the block, building two more stores at the lower level and three office suites and three living apartments on the second floor. This new addition complemented the existing building, using the same solid brick on the exterior. Dyke was still a business tenant, as was Singer, and both remained for many decades. The block continued to grow substantially and by 1919, an updated map of city planning showed that it now extended from 111 to 119 May Street South. Since that time, many businesses have come and gone from the Dyke Block. It has seen the presence of a grocery store and a janitor supply store, a sewing company and a place to buy hot sauce, and many realty and insurance companies, too. One thing remains the same, and that is the Dyke Block is still home to many wonderful local shops. If you do find yourself in the area, take a moment to appreciate the history of that building and pop into one of them.