An Arm Full of Heroes 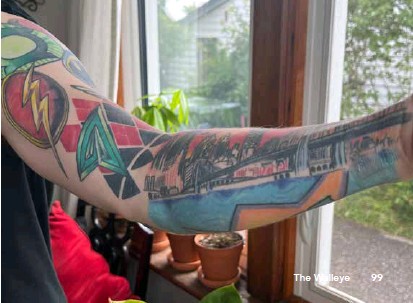 As a young boy growing up in Nova Scotia, Darryl Laydunn was a huge fan of superheroes. He loved the comics and the cartoons and even admitted to binge watching all 10 seasons of Smallville in a relatively short period of time. It’s no surprise that his first tattoo, at age 19, was the Superman logo. Laydunn spent several years in the army and then went to school for welding, all the while adding more and more tattoos to his growing collection. It wasn’t long before his entire left arm was covered in various scenes and logos from the DC universe. Laydunn met his wife while at welding school. After receiving their certifications, the couple moved to Thunder Bay to be closer to his wife’s family. Laydunn was building a cell phone tower when he decided to switch career gears from welding to nursing. He’s currently in his fourth year of nursing, working as a PSW at St. Joe’s, and balancing work and study with being a husband and father to a young son. From shoulder to wrist, Laydunn’s arm depicts a bright and beautiful tribute to a whole host of DC heroes (and even a few villains to balance it out). The first was, of course, Superman; now there’s Martian Manhunter, Wonder Woman, Aquaman, The Flash, and Batman, punctuated with classic sound effects (Kapow! Bam!), the Joker’s laughter, and Harley Quinn’s recognizable black and red diamonds. Despite the exhaustion and uncertainty of an overloaded healthcare system, Laydunn feels like he’s in the right place. The superheroes up and down his arm are a vivid reminder that he’s always wanted to be a helper. He says he truly enjoys helping people and that is probably why he’s always loved superheroes so much. “When the big hero comes in and saves the day and defeats the bad guys, it just makes you feel good. It’s predictable but it’s enjoyable and kind of triumphant,” he says. It’s hard to know what came first for Laydunn, superhero fandom or being a helper. Perhaps the two are inextricably linked. One thing, however, is certain: Laydunn is helping people every day. And while he can’t fly or lift up cars, he’s definitely a superhero.